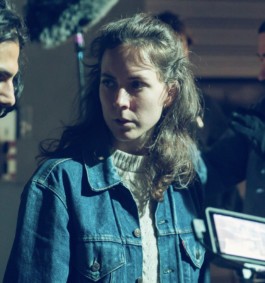 Zoë Schreckenberg is a German filmmaker, choreographer and dancer. Her artistic research primarily translates into live-performance and films. Her movement education includes contemporary dance, as well as combat methods and film stunts. Moreover she holds a bachelor's degree in theater, media and cinema studies.

In 2021 her current dance piece FUSS ZUM KOPF was presented as a work-in-progress format in the Staatstheater Darmstadt as part of the Tanzfestival Rhein Main 2021. In the same year her movie TRIEB, supported by La Briqueterie - CDCN du Val-de-Marne and POLE-SUD - CDCN du Strasbourg, among others, was shown at various European film festivals in Paris, Athens, Lisbon, Modena and Freiburg.
Her dance piece NACH DEM AUFSTEHEN UND VOR DEM LIEGEN was presented during CANAL in 2020 at the CND-Pantin in Paris and had its premiere in Imagetanzfestival Vienna at theater brut. In 2019 her movie KOHLE SAUER WASSER was awarded at the International Dancefilmfestival in Brussels.